A new administrative and commercial building, a renovated cellar... Between 2017 and 2020, the Paludate site was completely redesigned and refurbished in a way that enhances its historical heritage while incorporating a resolutely contemporary layout. 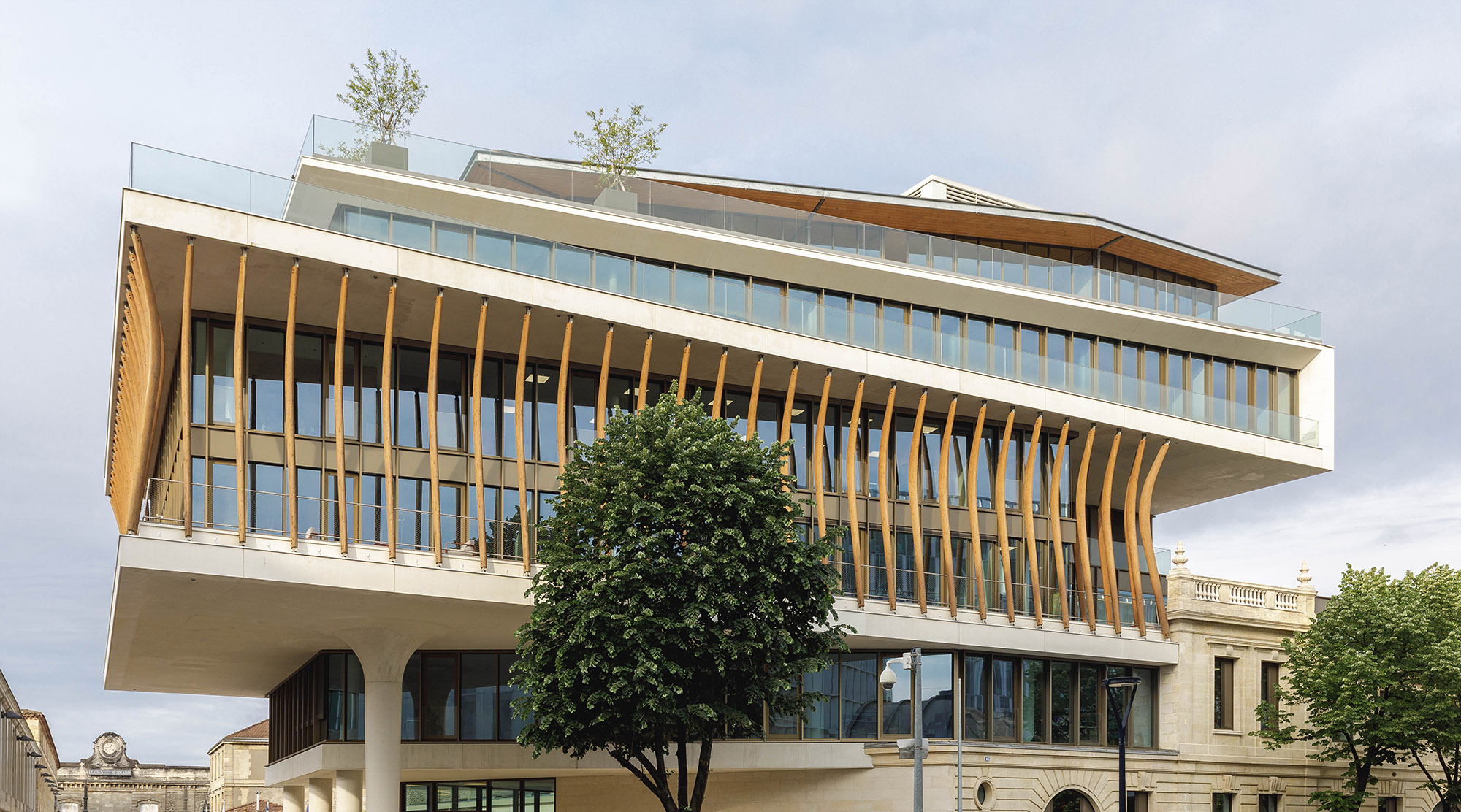 3,000 m2 spread over 5 floors on the quay side of the complex. The new Bernard Group administrative and commercial building on the Quai de Paludate is situated among major hotels, head offices and cultural and gastronomic hotspots of the Bordeaux Euratlantique district, which is currently undergoing a major revival.

At the time of its design by Bordeaux-based agency blp & associés, winner of an architectural competition between four candidates, a certain foresight was required to depict the buildings that would eventually rise between the Groupe Bernard site and the Garonne. The latter served as inspiration for the impressive cantilever hovering over the central aisle, which provides a window onto the river. The design of the structure also required careful observation of the remarkable original façades, witnesses of history, which have been recovered and further enhanced by the project.

"A forward-looking approach and a respect for tradition. Two values ​​woven seamlessly together in the construction of the building and renovation of the cellar".

The very contemporary architectural concept blends harmoniously into its environment. The natural materials used, particularly the oak staves which link the family businesses as well as the carefully selected stone, create a comfortable space for working and entertaining guests.

On the cellar side, a subtle balance between contemporary lighting, traditional storage design and strategically selected colours –the wine-red hue of the ceiling in particular– conveys a simple yet noble image of the business.

A new milestone in the history of Lucien Bernard

The Lucien Bernard distillery was established in 1928 in Bordeaux, on the right bank of the Garonne. Thirty years later, in 1959, Lucien Bernard acquired the Paludate site on the left bank and began ageing the distilled eaux-de-vie on the other side of the river. In 1974, the company also established the Ambès site, still on the banks of the Garonne River and 20 km downstream from the city of Bordeaux, making Lucien Bernard & Cie the leading brandy producer in Europe. Since 2020, the new head office at Paludate has become the headquarters for the majority of Groupe Bernard’s administrative and commercial teams.

As for the historic cellar, it still today accounts for 1/5th of the total capacity of Lucien Bernard & Cie (25 million litres in oak). The facility is also dedicated to premium brandy production, to the ageing of high-quality wine eaux-de-vie and to experimentation with new ageing methods, for example ageing in ex-Bourbon barrels and in red or white wine barrels from Domaine de Chevalier.

The Paludate site also serves as a storage and logistics site for Groupe Bernard’s wine trading businesses: Millésima, pioneer in the online sale of fine wines to consumers around the world (with a stock of 2.5 million bottles, including Bordeaux Grands Crus from the top Appellations d'Origine Contrôlée) Sobovi, preferred supplier of top chefs, sommeliers and wine merchants around France and abroad.